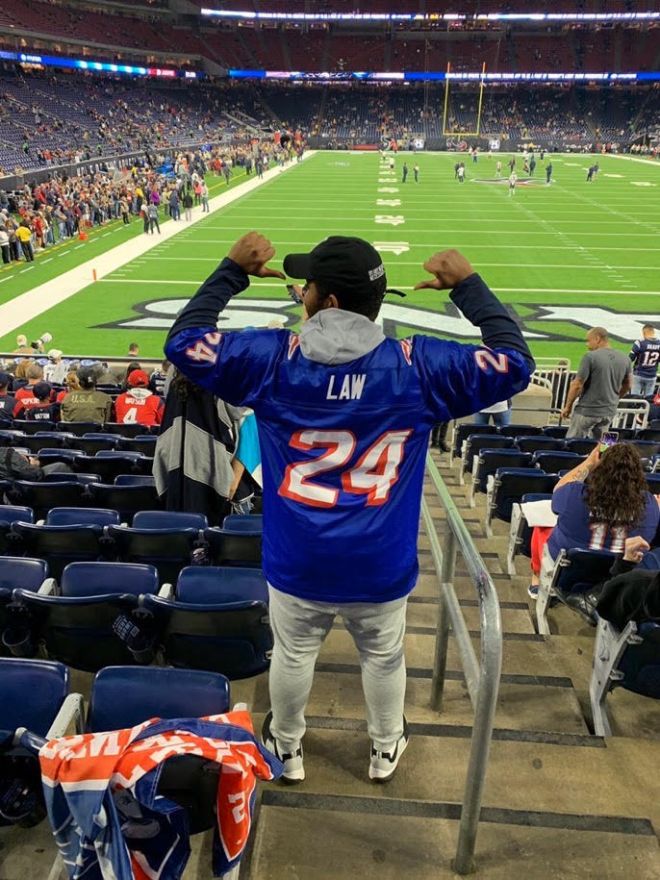 Posted on April 5, 2020April 5, 2020 by inthekcmix Posted in NFL, See How Long This Lasts, SportsTagged BLOG Interview, COVID-19, Football, Life, New England Patriots, NFL, random, Social Distancing, Sports, Tom Brady, Wrestle Mania, WWE
We are now weeks into “Social Distancing” and some of us are days into mandates of “stay at home”. In the midst of all of the issues with the virus, trivial matters in the world of sports have continued. These matters have served as a chance for us to focus on something other than “when will this end” and “why did folks buy up all the tissue”. Well that’s if you’re not a fan of the New England Patriots. For some, like my friend Catrell this has been a rough time. He’s only known one QB as the leader of his favorite NFL team. Tom Brady in some rather un-shocking news moved on from the New England Patriots. It was an expected move based on his age and play during the 2019 NFL Season. When the news broke, I text this guy and didn’t hear from him until the next day. HAHAHA he was really going through it. I’m glad that he did agree to do this blog interview. Oh and the cover photo was him in Houston to watch TB12 struggle in person.
Where were you when you got the news that Tom Brady would no longer be a Patriot?
Man what a day…March 17th 2020…I’m sleep in the damn bed working from home in the
midst of the pandemic when another expected yet slightly unexpected sports atomic
bomb rocks my world, Tom Brady leaves the Patriots after 20 years.
What were you doing?
I was actually sleep in the bed when your friend the “Troll Gawd” C.J. aka
Sandlot 12 called me at 8 in the morning to brag about Brady’s social media post … wild
times. The trolling even in a damn pandemic has not stopped, brutal!
How did you become a fan of the New England Patriots?
Despite the egregious claims from Sandlot 12 and his goon aka Maester Pycelle (our
pops) smh, that I switched teams during Super Bowl 36. I became a Patriot diehard the
night Tom Brady led the game winning drive and Adam Vinatieri hit the game winning kick. I’ve been a Patriots fan ever since that Super Bowl of 2001. The 3 SB runs in 4 years, the 10 year drought (losing to ELI TWICE), and of course the last run of 3 SB wins in 5 years. HOWEVER, Marshall Faulk was/is my favorite player non QB. The late 90s was my introduction into football and he was a special player as you know.
You “grew up” with TB12…Are you ready to root for a new QB?

“Grew up” huh real funny jabroni, I have no choice honestly at this point either way the change was going to occur through release or retirement. Bill Belichick (BB) has always had the mindset of “value” at a position (he is wrong sometimes) and moving on before it’s too late. These next two years in Tampa Bay -for Tom Brady- will tell if he was right but BB actually wanted this day to happen years ago…other factors came into play (owner Robert Kraft) that allowed Brady to continue and 3SBs wins followed shortly. I have seen legends from Randy Moss, Richard Seymour, Lawyer Milloy, Logan Mankins, Vince Wilfork and Ty Law get the boot. Hell even Chandler Jones, who has balled out in Arizona for years. He got the boot because BB is cheap and a bad batch of weed smh. I knew this day for Brady was coming but the sting doesn’t hurt any less even though he is 43. I hope that the next guy is ready to assume the mantle. Whether it’s Cam Newton, a young guy in the draft (Jordan Love, Tua, maybe Hurts). Current Pat’s QB and former Brady backup -Jarrett Stidham- seems to be the incumbent for now. He had a great preseason so we’ll see. The jury is still out on this cat. Although, “the rona” presents a challenge for the work a new QB could get within our system. This almost forces Stidham into the role for at least this year. *sigh* I know similar to our mutual love for LeBron and his consistency I have been spoiled by the GOAT at QB and at coach. Also playing in the AFC East doesn’t hurt either but hey such is sports.

Is this the toughest New England departure you’ve had to endure?
Absolutely, considering how hard it is to find a franchise QB. A QB that doesn’t turn the ball over and because Brady’s rise was so unexpected and unprecedented. BB will miss having Brady in the locker room to help “ready the troops” or just perform successfully with the misfit rosters BB often puts on the field due to his management of the salary cap and roster size. I’ve been a patriot fan for 19 years and I have seen every iteration of the roster from LOADED to maybe to meh to HELL NAH. The one constant was Tom Brady…every Sunday leading us to the field. In a perfect world Brady rides off with a SB win after Super Bowl 53 leading the game winning drive despite a shitty performance and retires. While we have a heir apparent because I don’t want to end up like the Dolphins after Dan Marino or the Bills after Jim Kelly. I hope we are able to find a guy to be our Steve Young for the 49ers or Similac Collarbone 12 for the Cowboys…wait the “Packers”. *blogger note…the Cowboys-Packers part is is a shot at Sandlot 12
Will there be NFL football in the Fall of 2020?

That’s tough to say I as type this on April 4, 2020. This virus is so unpredictable and health experts have surmised we will see a spike in the fall, which is football season. However, American greed and misplaced idealism is undefeated. I envision a truncated or full season taking place with no fans.

Speaking of no fans, you watched WrestleMania with no fans…
Man considering the state of affairs in the world, it was as good as it could be. The roar or “pop” of a crowd is something that adds to the experience of event as you know. As a wrasslin fan I hate having to watch it like that but understood the circumstances. Although the boneyard match with Taker (Undertaker) and AJ Styles was really entertaining. I fear this is what live sports is gonna feel like if they ever resume playing…“empty” (stadiums and arenas) but understandable.
Are you surprised by how long the coronavirus has lasted?
I’m not at all man because bacteria and viruses have been here for eons. These organisms are able to adapt and thrive to whatever their environment dictates. However, it has displayed American arrogance, lack of sanitary practices, and lack of informed readiness to attack the virus and prevent the spread of it. A plethora of health experts have come and stated the steps that should have taken place way beforehand but yet here we are left holding the “body” bag.
What are you doing to get through the “social distancing”?

I’m a social introvert or hermit crab by nature so working or being at home doesn’t bother me much. I hate the subconscious fear the virus and the fear of the unknown has placed on everybody. As a future health expert myself I do my best to educate myself so that I may help others do the same for everyone around them. It also sucks not being able to be around my family and bond with them during this time.