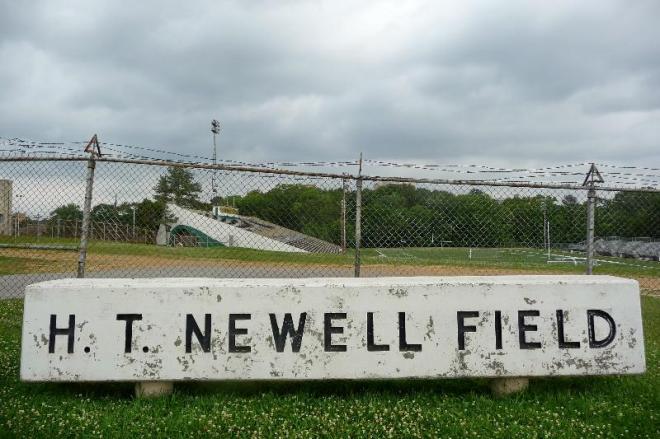 If you’re from Jackson then it’s likely that you’re familiar with Newell Field. It is currently used by Jackson Public Schools and Belhaven University. Most of my memories of the field center around JPS middle school and high school football games. I even shared a few personal memories on that field while I was in high school. I’m sure the stands will be filled the next 3-4 weeks as JPS Rival Schools meet to see who will have bragging rights in the City.

Today’s interviewee spoke of his time playing as a youngster and his time in college. One thing he mentioned was the transition from high school to college. He mentioned the term – redshirt – which is a common phrase for most incoming college freshmen (it may also be used by players that are sophomores/juniors/seniors). A redshirt is often designated for players that need time to adjust to college life on and off the field. It allows them to sit out a year and still have their remaining year(s) to play.

My interview today is with an individual that is a product of JPS. He used his talents to earn a scholarship to a NCAA “D-1” school and a college degree.

When did you first fall in love with football/earliest memory of the game?

Wow. 1st memory is easily going to a (I hate to admit this) JSU game. Family was/is huge JSU supporters. Well not so much now but more on that later. We traveled to all the games. Never missed a fall Saturday. I fell in love watching Wavy Dave (RIP) perform and hearing the 2nd best SWAC band perform. My mama never wanted me to play football which is why I didn’t play organized ball until 7th grade. I feel like that cheated me somewhat but I turned out ok.

Man, I’ve always had fun playing ball. Through the 8 straight losses my sophomore year and the 0-11 year the very next season. I always just wanted to ball. The blueprint was laid for me by very few guys and I tried to follow it. All in all, college was by far the most fun I had playing ball.

What was the recruiting process like once you realized you were talented enough to play D-1?

Good question. I had no idea. Lol. My earliest memories of recruiting is witnessing my high school coach hoard letters from schools that were coming to watch guys play. This was in the 9th grade. Let’s just say me and some teammates stumbled upon his desk and saw that scouts/coaches were communicating or trying to communicate with the seniors that season. And these guys didn’t know until AFTER the season had ended and we missed the playoffs by 1 game. This “by 1 game” would define my career actually. All that being said, led me to feel as if I (Mom and Dad) were going to have to do our own recruiting. I didn’t realize schools were actually noticing me. I mean I had been starting since my freshman year, played both sides of the ball. I even made an honorable mention all metro team. Back then, the paper only published the top 3 selections. I didn’t even find this out until I attended a scholar-athlete banquet. Smh. So when schools were recruiting me, I was shocked. Thing is the two schools that had the most weight for me (Miss State and jsu) were going through coaching changes. Miss State had been recruiting me and a teammate until Sherrill was fired. Croom said nope, lol. jsu and Judge were recruiting me also. Bell, said and I quote “I don’t want you, I’m going after junior college guys”. This. This here, rocked me to my core. I literally was shaken. The only SWAC school I ever knew. Ever cheered for.

Is it proper to say “college student playing football?” or “football player in college?”

Depending on the person. Both phrases apply. It’s funny because, people that don’t play sports in college don’t understand the sacrifices we make to just graduate. We do more stuff before 6 am than most do for an entire day. Lol. And then, we don’t have any free time unless it’s after the games on Saturdays.

How did you balance football and college life?

I didn’t really do anything special. It was never hard to manage for me. Football is what I did and I did whatever it took to keep playing. School has always been easy so I never really had a problem.

Describe the NCAA through your point of view

NCAA is trash. Too many rules. Too many ways to make money. Not enough help for athletes. Playing a sport in college, you’re held to higher standards. Almost professional in some places. Yet no one gets paid but the coaches. And ADs. And Presidents. But their not busting knees, dislocating body parts to play. Yes. It’s a choice. However everyone that plays a sport, doesn’t always “have” to play. For example, I could went wherever and just been a student but I wanted to play ball. New stadiums. Student enrollment. All can be attributed to athletics. Not the education majors. Not the IT guys. Not the chemistry majors.

What do you miss about playing football?

The locker room. The road trips. The grind. Having somewhere to be. Learning a new defensive scheme. Studying film. I miss everything about playing. The first practice before the first game. The Oklahoma drill (which I never lost). The competition.

Did you ever think about semi-pro or anything like that?

Yes. I did. Didn’t pursue it further. Was tired of playing ball at that point.

What advice would you give young guys playing the game thinking about reaching the college level?

Run. Run. And run some more. Do a bunch of calisthenics. Take your protein. Run some more. Work on your craft. Try not to get a part-time job. Hard to practice and make money. Gotta sacrifice one. And go where you’re wanted. You’ll have a much better experience. Don’t overthink the process. Forget about depth charts. To this day, I wish I had been redshirted.

Explain why you would’ve liked to redshirt.

Well, by the end of high school… I had only played football for six years. Never had a position coach. A strength coach. Nutrition advice was simply “eat ya vegetables”. My growth as a player was basically all me. Yes, I had coaches who pushed me but only to fit what they wanted. Came to high school not being able to lift 185 pounds. Was always a big kid. Worked my tail off to get stronger. Wanted to be the strongest on the team. I achieved that by my senior year. But even this was misguided. I was young and wanted to play. I started every year I ever played football except 7th grade because of weak *** rules but whatever. Part of not being redshirted was my fault too. I refused to be redshirted. I wanted to prove to everyone that I can play and that’s what I did. Being redshirted would have given me an opportunity to grow my body in ways that I hadn’t been able to before. Would have allowed me to develop my footwork, hand speed/strength and possibly allow me to be even stronger than I was. I mean I left college being able to lift 225 lbs – 36 times. And that was without any supplements or guided training. That was all me. Maybe I should add, being redshirted and receiving the proper guidance would have been beneficial for me.  I just feel as if I would have been that much better taking that shirt.

What are your overall thoughts on the “state of football”? (all the rules changes, injuries, etc.)

Football is in a great place. Still exciting to watch. I’ll admit, I haven’t sat in the stands for a college game in years. SWAC ball looks so different. Rule changes are just a reflection of trying to protect the game not the players. Players are meat in a meat market. Always have been and always will be.